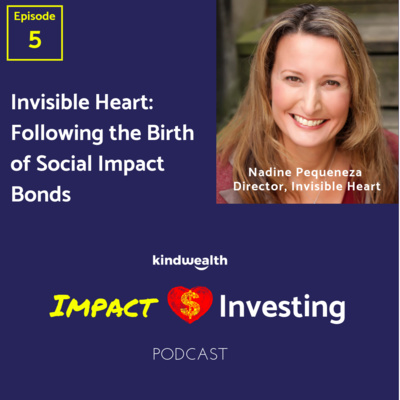 The for-profit and non-profit worlds are on a collision course. Already the lines are beginning to blur as new fields like impact investing, social enterprise, and blended finance emerge. Host David O'Leary is an Entrepreneur, Speaker, Analyst, and Change Agent. Join him for a series of conversations with changemakers from all walks of life who are using for-profit principles in surprising and creative ways to drive social and environmental impact.
Episode details
Comments

In this episode, David is joined by Nadine Pequeneza. Nadine is an award-winning Director, Writer, and Producer best known for her social issue films offering unique access to character-driven stories. She is also the owner of HitPlay Productions. Nadine's most recent film, Invisible Heart, is the world's first documentary about Social Impact Bonds (SIBs). The film paints both a picture of hope around the potential for using market-based approaches to solving social problems but also challenges us to consider the unintended consequences that may result. During the episode, we discuss both the promise and pitfalls of social impact bonds, the reactions Nadine has received to the film thus far, and what the future may hold for this novel new instrument.